I’ve been quiet these last few weeks. It’s been cold and rainy and snowy around here. Jellybean and I are adjusting to life in a much smaller town. It’s been tough at times – we’re used to playdates and Mother’s day out and and being able to go to the zoo or the science museum or any one of several BIG playgrounds whenever the fancy strikes us. There are a couple of parks here, and he thinks they’re fun, but it’s been so cold and wet, we haven’t had many opportunities to go and when we have gone, we’ve been the only people there.

I spent several days looking for a MDO or preschool program in the area and that turned out to be a disappointing. The one program that takes kids younger than 3 is full and he’s not eligible for the others until the fall. So, we’re having to find other things to do. He’s a very social kiddo and needs time with other people his age to play with, so I’ve been looking for other ways to keep him (and us) occupied.

We’ve made a habit of going to the local library’s story hour and he just loves that. I also signed him up for gymnastics again. He’s in a more advanced class, now, so I am not out on the gym floor with him. We had our first class last Monday and I was a little nervous about how he would do with the differently structured setting, but I was pleasantly surprised and very proud of him! He really enjoyed the class, too, so that one’s a winner! I’m still looking for maybe one more regular thing to do, but we’re both doing better now that we’re getting a routine settled.

First of all, I need to show you guys the stockings I finished this year. First up is the one I made for Ashley’s new baby boy. I love the way these look together.

All four stockings by the fireplace. So sweet!

Next, the four stockings I made for Amanda. These were the ones that pushed me out of my comfort zone and I’m so glad they did! Projects like this help me learn new skills, polish up old skills and are a real boost to the confidence!

I just LOVE the display!

I also finished a sweater. Not the one I told you about, but one for Jellybean. It’s been difficult to get him to actually WEAR it, so I have no cute photos of him in it yet, but I love the way it turned out and it fits him well (at least as far as I could tell for the two minutes he had it on!)

He wasn’t fond of wearing last year’s sweater, either, but I thought that might have been because it was wool. This sweater is made with Knit Picks’s Mighty Stitch, which is 80% acrylic and 20% wool. It’s soft and has a silky feel to it. But he still doesn’t want to wear it. 🙁

We’ve had a round of snow this past week. With the snow came the realization that my kiddo had no mittens that fit. Luckily, mittens are fast and easy, especially for little hands. I used the pattern Dulaan Easy-On Mittens by Julia Farewell-Clay and I made these in an afternoon.

They’re awesome, but he won’t wear them. He puts on his old mittens that barely cover his hands to go out and play in the snow. *sigh* I really thought I had a few more years before he refused to wear the hand knits I made for him.

He needs a new hat, and he asked for a Mickey Mouse hat. Maybe he’ll actually wear that one if I make it.

In between these projects, I have still been working away on the re-knit of Hubby’s sweater. I’ve finished the sleeves and I’m working on the back, now. I’m also working on a birthday gift for my soon-to-be three year-old (THREE?! yes, three.) I’m looking forward to showing that to you, too.

Enjoy your week and stay warm and cozy!

Monday’s Update (Late) on a Tuesday

This is getting to be a habit, isn’t it?

I’ve spent lots and lots of time adulting this week. Things just gotta get done, ya know? The craziness of preparing to move plus trying to find a new house plus getting this one ready to sell (we can’t find any handy people who want to bid our job!) plus keep up with all the normal stuff we need to do (for some crazy reason, my family still wants dinner. Every night!)

Take all that and add in a toddler who’s dropping naps (woe is me!) and it’s a struggle to get anything done.

I’ve instituted a daily quiet time for the toddler, which will allow me too get something done, and I’m using my MDO time to pack and sort through all our stuff. Which only leaves bedtime for knitting. The plus side is that we can put jellybean to bed early when he doesn’t nap and he usually doesn’t have an issue with that.

I’ve been focusing on my husband’s sweater for the last week or so. I’ve finished one sleeve and made good progress on the second. The pattern is easy and predictable, so after the first repeat, I didn’t need to look at the chart anymore. 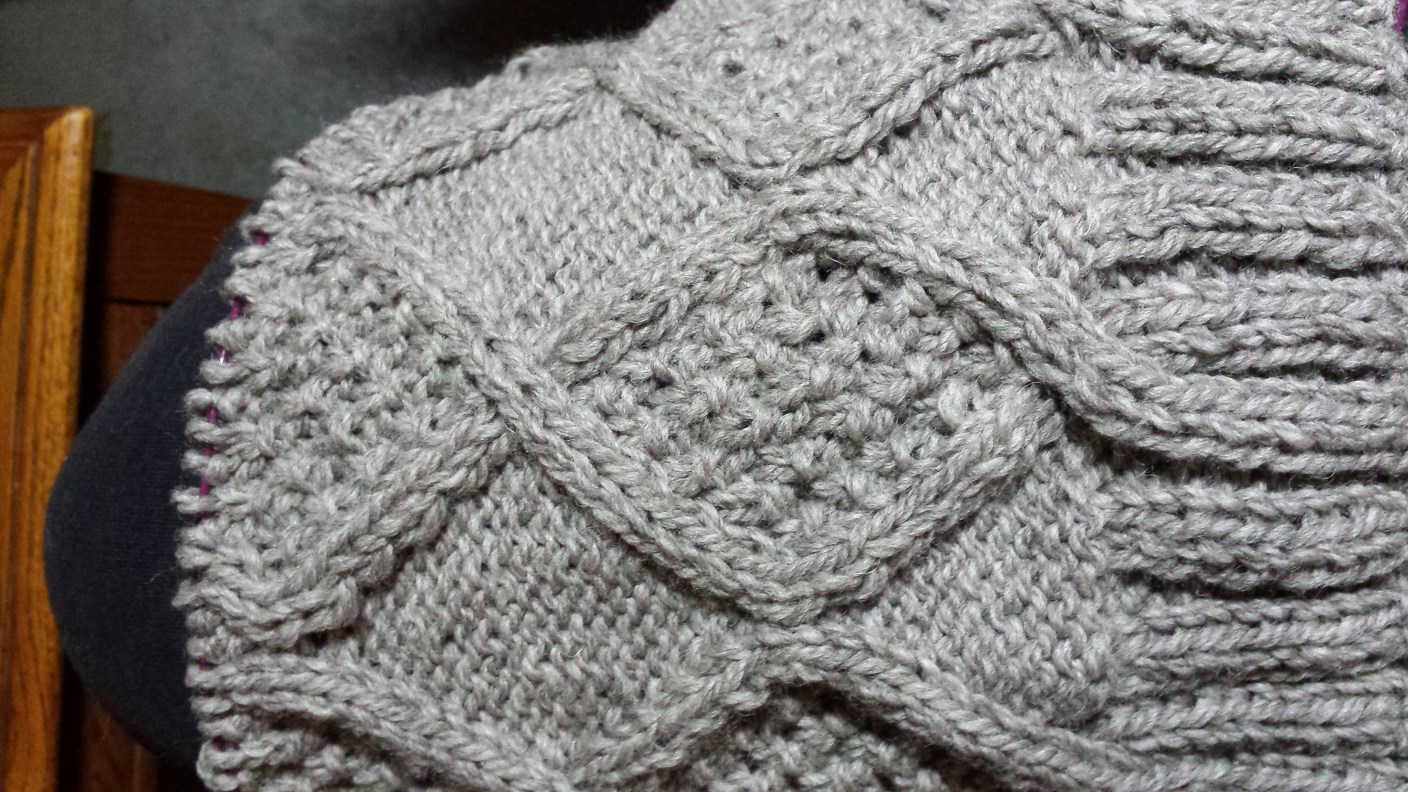 This sweater is constructed differently than my cardigan. My cardigan was knit all in one piece with no seams. This sweater is knit with the front, back and sleeves being separate pieces. 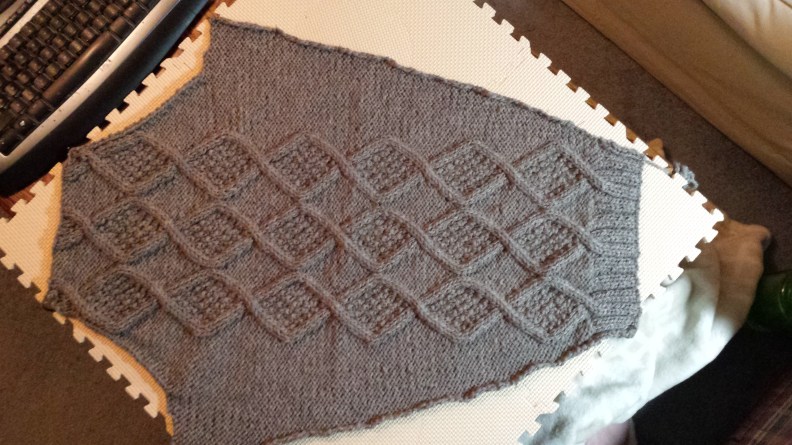 Patterns always start with instructions for the back, then the front, then sleeves. I started with the sleeves, though. I do have a reason! The sleeves start out at the cuff, and are only 54 cast on stitches rather than 120-something. I used the first sleeve as a gauge swatch, so I sorta cheated. Turns out I hit the gauge right on the money so there was no need to rip out. Always a good thing.

When I started the second sleeve, though, I realized I forgot to change one of the needles after the cuff. (The ribbed cuffs are usually knit with a needle one or two sizes smaller than the body.) So I knitted the entire sleeve with an 8 on the wrong side and a 9 on the right side. Oops.

I’m not really sure if that will have a huge effect on the overall fabric, but just to be on the safe side, I forgot to do it again on the second sleeve.

I have a few stockings that are washed, blocked and ready for details and personalizing. Two are for the shop and the other two are claimed. One of these nights, I’ll take a break from the sweater and get them finished up.

I have plans to offer some luxurious lip butters and lotion bars in my shop this fall, too. My father-in-law keeps bees, so I have an awesome local source for untreated beeswax. I’m very excited about this!

Tomorrow we’ll be looking at more houses. Wish us luck that we find one we like! Have a great week!

P.S. I wrote this entire post on my phone, since I’ve been to busy to sit down at the computer. I hope the mistakes are few and forgivable. 🙂

Filed under Family, Knitting, Not Knitting