So, around this time last year, there was a little baby born.

He had a rough start, with feeding and allergy issues, but we’ve found workarounds for those issues and he’s thriving.

His birthday, this past Sunday, came and went without too much fanfare. We had plans to visit family and we took some brownies to celebrate with, but the real party is next week.

I’ve so enjoyed watching him grow up this last year, but it does come with a touch of sadness. He’s our last baby, so his life will be the last of the firsts. This is the last first birthday. He’s had the last first tooth, the last first step, and so on. There aren’t as many photos of his every milestone, like there was with Jellybean, but so it goes with second babies.

He’s at a stage right now where he’s into everything, learning and exploring, and while it is absolutely exhausting, it is so much fun to watch. He can say “Uh Oh”, “Ow”, and just recently learned “No.”

He has a word for “this” and “Daisy” and he makes his barking sound when we get home and get out of the car, as he’s looking around for Daisy. When he gets done eating, he calls for her to come clean up the food on the floor, too!

He adores his big brother and they play together more and more frequently these days.

One day, we’ll have coordinating furniture that isn’t cat-clawed. Maybe in about 20 years.

He loves his mama, almost to the point of being clingy, but can’t quite resist a little adventure. He’s timid around strangers, much more so than his brother was at this age. I’m ok with that.

He’s a happy child, but not without his little moments, of course. He’s fun, funny, smart and mischievous. He’s my baby boy.

Working at the garden. (if you can count eating dirt as working!)

Filed under Family, Not Knitting

We’re traveling home from a weekend with my parents, and I’m writing this on my phone.please excuse any weird autocorrect mistakes. 🙂

We’ve all had a good time at my parents’ house. This was Lollypop’s first time to visit them, and he was a little dubious at first, but he warmed up really well. Especially when Papaw was swinging him around and around.

Jellybean got to play in the dirt, see Papaw’s workshop, read stories with Mimi, and get spoiled with bunny grahams, ice cream, tv and staying up late.

We’re all tired, of course, as it goes when you travel, but it’s so worth it.

I got to do a little bit of knitting. I had been participating in a design challenge, but I got stuck on step 3 of 5 and wasn’t able to concentrate on it enough to get past the hump. I will continue on with the challenge this week, thigh, and I may end up with a pattern out of it.

I managed to finish block 9 of the Knitterati Afghan. This one wasn’t my favorite looking block, but it was actually quite fun to knit. There’s a lot going on in this one. Cables around the border, wraps, 5-stitch bobbles, 3-stitch bobbles, a 1-to-7 stitch increase and a 5-stitch decrease. It definitely kept my interest as I was knitting.

It still needs to be blocked, but I wanted at least one picture for my post today. I have blocks 7 and 8 finished and blocked, but of course I didn’t take photos of those before we left. (I was to busy getting us all packed!)

The next big item on my to do list is planning a first birthday party! I’m having so much fun planning this one, but trying to keep it small. I’ll tell you all about it in a few weeks!

Have a great week, my friends!

I usually write my posts ahead of time and have them queued up for Monday, but I spent this weekend knitting and hanging out a bunch with my kiddos. It was such beautiful weather here, we spent hours at a time outside.

This past week, though, I got all caught up on my Knitterati Afghan blocks. Well, except for the squirrels, hearts and weird leaf-pocket one; I’m not making those. The last two are blocking, but I can show you pictures of the three I have finished.

This one took quite a bit of yarn, thanks to all those cables. It blocked out nicely, though.

This one was fun and fast to do. I did get tripped up and you can see a row there that’s not quite right. Like I’ve said many times before, though, “Finished is better than perfect” and I am moving on.

I started and finished blocks 7 and 8 this weekend, but it’s rainy today and they’re drying so I don’t have good pictures of them for you this week.

I also managed to finish the crochet elephant’s ears this weekend. I have to block them before I can sew everything together, and since my blocking board is taken up with the afghan blocks, the elephant will have to wait until later in the week. I’m trying to decide whether to put the tusks on the doily, though. 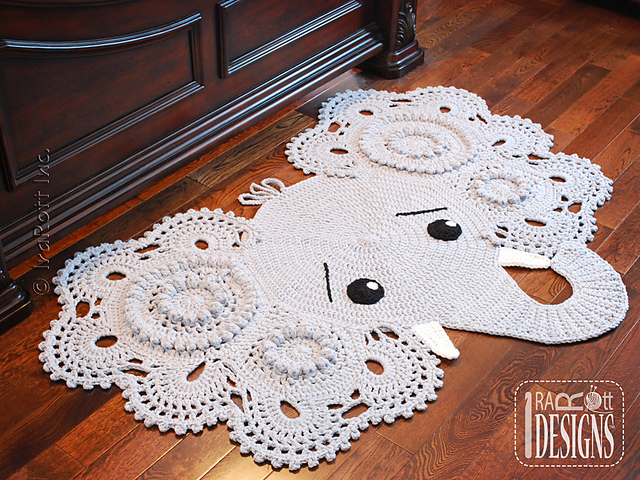 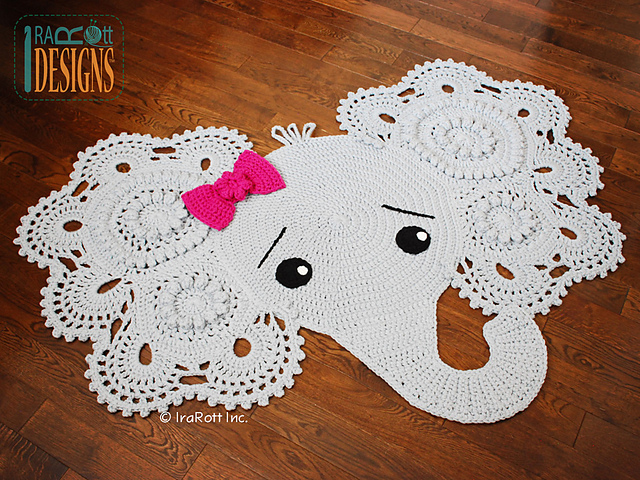 While they’d be quick and easy to make, I like the idea of having a baby elephant for my baby boy. What do you think?